Whale Watching in Cabo San Lucas: Why It’s One of the World’s Best

Whale watching is one of the most exciting things you can do in Cabo San Lucas. The number of whales passing through here is so immense that visitors are guaranteed to see at least one during the peak months from December to April. But what really makes whale watching special in this part of the world? And what can you expect when you find yourself joining one its tours? Read on to find out.

Sitting at the tip of the Baja Peninsula between the Pacific Ocean and Sea of Cortez, Cabo San Lucas is a very special place for encountering whales. The Pacific Ocean has become a highway for Gray and Humpback whales as they make their way from Mexico to Alaska, while the Sea of Cortez is a whale sanctuary, thus creating an area highly concentrated with whales.

Considered as one of the world’s most biologically-intact seas, the Sea of Cortez enjoys a high population of Gray and Humpback whales from December to April. Add that to about 75 percent of whale species in the Sea of Cortez and you will find that whales thrive in this area all year round. On some tours, you can catch a glimpse of other species like Blue, Fin, Sperm and Killer Whales.

Another thing that makes whale watching in Cabo San Lucas very special has to do with the reason why they are in Los Cabos in the first place. Every year, the whales return to their place of birth to play, mate and give birth. Thus, whales spend energy in displaying their emotive state physically. Do not be surprised to see them launching themselves from the water and making a big splash. 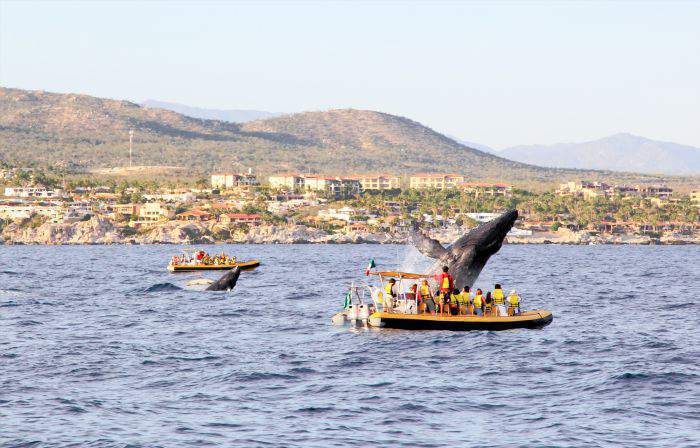 And as if seeing a whale in all its glory is not good enough, visitors are also treated with other whale behaviors like flipper slaps, breaches, tail lunges, spy hops and tail slaps. By far, the Humpback whales have proven to be the most impressive. During those months when the whale population swells, you will witness wild displays of whale desires as they impress each other to look for a mate.

There are many tours offered in Cabo San Lucas that will give you a chance to get up close and personal with these majestic creatures. Join any of their tours now and see different whales display themselves in all their grandeur. Indeed, whale watching in Cabo San Lucas is one sensational adventure of a lifetime that you will treasure forever.